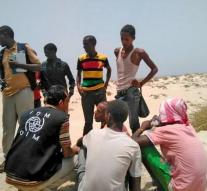 geneva - Human traffickers have reintegrated 180 migrants from Ethiopia and Somalia to the coast of Yemen. Presumably 55 of them drowned, the International Organization for Migration (IOM) announced on Thursday.

One day earlier, fifty refugees from the same countries were hunted for drowning. 'A human trafficker abandoned its 120 Yemen passengers on board, according to the IOM.

'There seems to be a new trend,' said a spokesperson for the IOM on Thursday. 'Smugglers know that the situation is becoming increasingly difficult for them. That's why they leave their passengers behind the coast. '