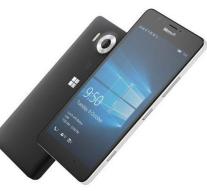 amsterdam - The new Lumia models from Microsoft are available in the Netherlands since the beginning of December . The Lumia 550 , 950 and XL 950 since Monday also ordered already pre-order , so Microsoft announced . The smartphones were presented early this month in New York.

The most powerful model, the Lumia 950 XL with a 5.7 ​​inch screen. This smartphone runs on Windows 10 and can be used as a PC, using a Microsoft Display Dock.

Thus a display, mouse and keyboard to be coupled to the device. This also applies to the Lumia 950, of which the screen is slightly smaller : 5.2 inch. The 550 - model 4.7 inches in size.

This device costs 129 euros. 950 available in black and white, will cost 599 euros. The XL version is one hundred euros more expensive.