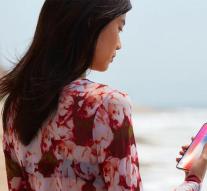 cupertino - People who want the brand-new iPhone X may need patience. According to analysts, the production of the luxury smartphone has been delayed for several weeks. Manufacturing may start in October. By December, the first devices should be delivered. The presale will start on October 27th.

The iPhone X was presented last week. The device comes with a front-fading screen and has face recognition with which the user must log in. It does not have a fingerprint or Home button, which are on other iPhones. There are two versions. The 64GB iPhone X will cost 1159 euros in the Netherlands, the 256GB version costs 1329 euros.

The name of the iPhone X refers to the Roman figure for ten because Steve Jobs presented the first iPhone ten years ago. The smartphone is above the 'regular' iPhones 8 and 8 Plus, which was also revealed last week.