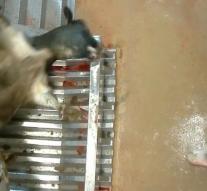 the hague - Animal welfare organization Animal Rights has once again brought out shocking images of animal welfare. This time it is a slaughterhouse for cattle in the Flemish Izegem.

On the hidden camera images, it is possible to see how coworkers work hard-handed with a stick to hunt them into a shooting box. The stick is stabbed on sensitive parts of the body, including the anus, of the animals.

According to the organization, the meat is available from Makro wholesale and is therefore also in the Netherlands at the menu at restaurants.

'An employee systematically applies electrical shocks to the cattle, which is not legally permitted. In spite of the legal obligation that animals must be anesthetized during the slaughter process, the images will see more cattle beaten and bled in full consciousness. Employees do not take measures to give them an additional anesthesia, 'says Robert Molenaar, Director of Animal Rights.

According to Molenaar, it is about the slaughterhouse Verbist, part of the VEVIBA group. The main customers in Belgium are Delhaize, Colruyt and Carrefour. About 5 percent of sales are exported to the Netherlands and France.

Animal Rights has taken a lawyer to file a complaint with the Animal Welfare Inspectorate in Flanders.

Earlier this year, a controversial slaughterhouse in the Belgian Tielt had to temporarily close after Animal Rights had revealed gross misconduct at the company. The pigs there were kicked, beaten and drowned in a hot water bath at full consciousness.