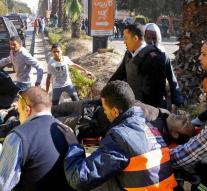 - A recently surfaced extremist group in Egypt on Friday claimed responsibility for an attack with a car bomb. Who robbed earlier Friday in Cairo six policemen of life. The group called the Movement Hasm (vigor), this allowed on the Internet.

Hasm has claimed a number of attacks in recent months, as the beginning of October an attack on the Deputy Attorney General Zakaria Abdelaziz. That attack with a car bomb failed otherwise.