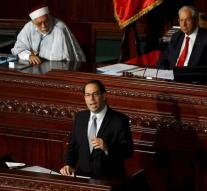 - The Tunisian parliament Friday (local time) his confidence given to a new government of national unity. 167 deputies voted for the cabinet of the new Prime Minister Chahed Youssef, 22 against. The parliament sent the previous prime minister, Habib Essid away because he did too little against the economic crisis.

Tunisia after the beginning of the Arab uprisings is the only country in the region where the transition to democracy is successful. However, the country faces serious economic problems and terrorism. In the past year had several attacks were carried, among other tourists.

The 41-year-old Chahed, who belongs to the secular party Nidaa Tounes, warned that there must be drastically cut next year if the economy does not get going. The new prime minister is agricultural economist and professor. Chahed has sought the formation negotiations for the broadest possible support to carry out urgently needed reforms.