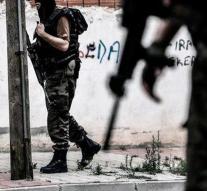 berlin - According to information from the German government, Turkey has again held a German couple. 'There are concrete indications that a German couple of Turkish origin in Istanbul have been arrested by the police,' said a spokesman for the German Ministry of Foreign Affairs.

One of them remains in insured custody and the other may not leave the country, the German government states. There is no official information about Sunday's arrests, but the spokesman said the arbitrary nature of ongoing arrests by Ankara reason is 'for the utmost care'.

'The nightmare remains for so many German citizens who only want to spend their holidays in Turkey,' said the spokesman. 'It can happen to anyone entering Turkey. One believes not to be in danger, but suddenly you are in a Turkish prison. '