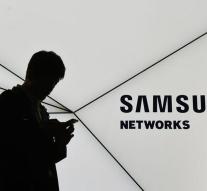 seoul - Samsung wants to present its new smartphone, the Galaxy S9, in January 2018. That's more than usual. Half February, the device should then be on the market. That reported both tech and South Korean media.

Samsung presents the smartphones mostly in February at the Mobile World Congress in Barcelona. This year the presentation was a little later. The S8 was unveiled at the end of March and delivered at the end of April. Samsung took more time because the previous device, Note 7, had to be taken out of the market soon.