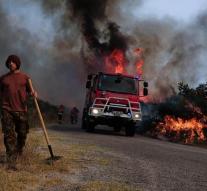 Seriously affected are the Castelo Branco and Coimbra regions, where eucalyptus forests are on fire. In the Santarém region residents of three villages have been evacuated.

Last week, the parliament in Lisbon decided to reduce the growth of light-flammable eucalyptus trees in the future. The central government thus reacts to the great forest fires of June. Most of the 64 deadly victims then came to their car when they tried to escape the fire. Environmental activists have been calling for a refurbishment of the forests in the very hot and dry land especially in the summer.

The eucalyptus tree is a major component of the pulp and paper industry in Portugal. However, the oily leaves easily flame.