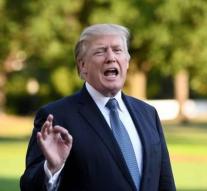 washington - The US government is going to expand the controversial entry ban further. Citizens from North Korea, Venezuela and Chad will also be subject to restrictions when traveling to the United States. Iran, Libya, Syria, Yemen and Somalia remain on the list.

The current entry ban of President Donald Trump expires Sunday (local time), but the new measure will not take effect until 18 October. This prevents travelers from being attacked by the measure. An American government official also acknowledged reporters who travel few North Koreans to the US.

'Safeguarding America has the highest priority for me,' wrote Trump in a tweet. He said to reporters earlier that 'stricter is better'. According to US officials, it is not expected that all citizens from the countries concerned are expected. Limitations may vary by country.