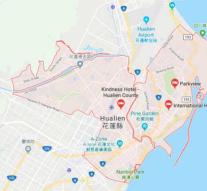 taipei - Taiwan has again been hit by an earthquake on the east coast of the island, this time with a strength of 5.7. According to the central government, the earthquake took place in the vicinity of Hualien, the same area that was hit by a strong earthquake on Tuesday and where the rescue work is still ongoing.

The American geological institute said the quake was 21 kilometers northeast of the city, at a depth of 11 kilometers. Whether the new quake caused damage was not immediately clear.

At least seven people were killed and 67 people are still missing as a result of the first earthquake in the popular tourist town of Hualien.