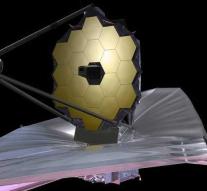 houston - An important new space telescope, the James Webb, has been delayed again. The launch of the probe has been postponed for two years. He will go into space at the earliest in early 2021 and not next year, as intended.

The development of the space telescope is difficult. It was initially intended that he would be launched in 2007, but that is being shifted almost every year. 'We have to have it here on earth before we go to space. And I want to emphasize: Webb is worth the wait ', said director Thomas Zurbuchen of the American space agency NASA.

It takes longer than expected, among other things, to test all new technologies on board. In addition, human errors have been made. This caused cracks in a sunscreen. Seventy bolts loosened in a vibration test. They fell into the telescope and a few are still not found.

The James Webb is developed by Europe, the United States and Canada together. He must become the successor of the Hubble, which is almost thirty years old. The James Webb must search, among other things, for planets where life might be possible, for distant galaxies and for traces of the Big Bang. He is about the size of a tennis court. The core is a 6.5-meter mirror of gold and beryllium. That captures the light from space. The mirror is three times larger than that of the Hubble.

The James Webb has been working since 1996. The total project costs more than 8 billion euros.