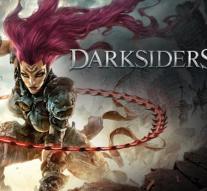 - THQ Nordic has revealed a new part in the Darksiders franchise. Darksiders III is scheduled for 2018 and will appear for the PlayStation 4, Xbox One and PC. The game is being developed together with Gunfire Games, consisting of the original developers.

'As promised, we took our time to ensure that these new Darksiders are all about action-adventure gamers and certainly the Darksiders loyalists of dream and more,' said Lars Wingefors, co-founder of THQ Nordic.

'The Gunfire team brings personal involvement with every aspect of the Darksiders franchise. There is simply no team qualified to create Darksiders III. To begin with our unpredictable and enigmatic hero Fury, a stomach considered to be the most powerful of the four riders of the Apocalypse, 'says THQ Nordic topman Reinhard Pollice.