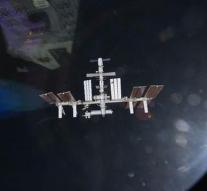 MOSCOW (Reuters / DPA)- The crew of the International Space Station is complete again. A space capsule with three astronauts arrived after a flight of about two days at the ISS, reported the Russian news agency TASS Sunday (local time).

The new crew are the American Peggy Whitson, the Russian Oleg Novitskiy and Frenchman Thomas Pesquet. They keep about six months in space. On board the ISS works with the arrival of the trio a total of six astronauts. There were two Russians and an American presence.