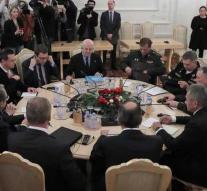 geneva - The United Nations is attempting a new attempt to bring a solution to the conflict in Syria closer. UN mediator Staffan de Mistura invited the warring parties to come and talk in Vienna on 25 and 26 January.

The focus is on constitutional issues. In a Syria resolution, the Security Council has called for a new constitution, elections under UN supervision and responsible governance.

The special envoy for Syria expects all those involved to be open to a valuable dialogue. The eighth round of the UN negotiations on Syria did not yield anything in mid-December. The delegations once again did not speak to each other, but each with De Mistura. It was hopeful that the opposition parties together this time.

Russia, Turkey and Iran have also taken the initiative for a 'Congress of the Syrian people' on 29 and 30 June in Sochi. The Syrian opposition rejects that because it bypasses the Geneva talks under UN mandate.