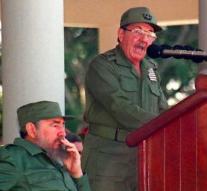 havana - In the new constitution of communist Cuba, private property is recognized again. That is what state media report on the island.

The current constitution dates from 1976, when the Cold War was still in full swing. Raúl Castro, the brother of former leader Fidel Castro, has already spoken out for adjustments. The new constitution would also recognize the free market. A president may also be appointed only two terms of five years. There would also be a prime minister, in addition to the president.

The parliament may soon first consider the draft version of the new constitution. This will later be presented to the public in a referendum.