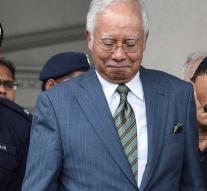 kuala lumpur - Former Prime Minister Najib Razak of Malaysia must stand trial for new accusations at his address. He is suspected of three cases of money laundering. He would have received 42 million ringgit in his personal bank account from a state fund, which amounts to 8.8 million euros.

Razak can get 15 years in prison. He himself denies being guilty. Other charges are also being filed against the former prime minister because of the multibillion scandal surrounding the state fund. According to the prosecutors, he has misused his power and damaged trust. He was arrested in July.

Razak was Prime Minister of Malaysia from 2009 to May 2018. He set up the state fund to boost the economy of the country and capital Kuala Lumpur. In May he lost the election of the elderly senior government leader Mahathir Mohamad.