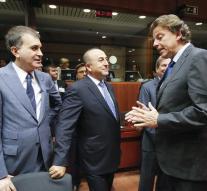 brussels - In the negotiations with Turkey on accession to the European Union on Thursday opened a new chapter on the contribution to the EU budget. The EU Member States have given the green light for here. They stressed the importance of a close relationship with Turkey.

Since negotiations began his opening 16 of the 35 chapters in 2005. There is only one closed. Turkey has thus still a long way before it can join. Minister Bert Koenders (Foreign Affairs) pointed in Brussels on the need for Turkey is undertaking rapid reforms in the rule of law and fundamental freedoms.

When closing the refugee deal with Turkey, the EU promised in March to revive the accession talks new life. While Turks were also visa-free travel are anticipated. However, Turkey has not yet fulfilled the conditions in the field of terrorism and privacy laws. The land claim itself or to meet the requirements.