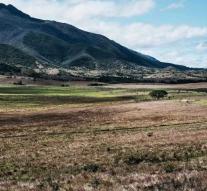 noumea - New Caledonia will vote in a referendum on independence from France on Sunday. About 175,000 inhabitants of the archipelago in the Pacific may vote. The strongest advocates for independence are the Kanaken, the original inhabitants. They have been waiting for the referendum for more than three decades.

Studies show, however, that a majority is against independence. According to this data, more than 60 percent of New Caledonians are in favor of keeping the archipelago with France. Some 'Caldoches', as the immigrants from Europe are called, fear unrest when they say no on Sunday. France has increased the number of security forces on the archipelago.