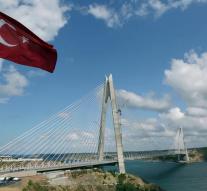 - In the Turkish city of Istanbul Friday opened a new bridge leading over the Bosphorus. Like the other two bridges over the strait connecting the Yavuz Sultan Selim bridge Asia and Europe. It is built on the bridge three years.

The other two bridges over the Bosphorus are many files that should decrease through the opening of bridge. The four-lane bridge is 2100 meters long and almost sixty meters wide. Also two train tracks were built. Turkish President Tayyip Erdogan attended the opening.

The new bridge is part of a major infrastructure project worth more than 170 billion euros, which was announced by Erdogan three years ago. A huge new airport in Istanbul, and the construction of a large canal are part of the plans.