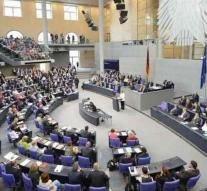 berlin - The special election system makes the Bundesdag much larger than that chosen in 2013. Sunday, 709 delegates have been chosen, which is 78 more than in 2013. It's the biggest Bond Day ever. The record of 1994, 674 seats, has been demolished.

The party of Chancellor Merkel, the CDU, has (together with the Bavarian sister party CSU) 246 seats in the new Bond Day. The Social Democratic SPD of Martin Schulz 153.

Third party of the country is the right-populated Alternative für Deutschand (AfD) which has won 93 seats. AfD headline Frauke Petry said Monday that her seat can not be counted as the AFD group.

The Conservative-Liberal FDP returns to the German Lower Chamber with eighty-one seats. The left-radical Die Linke has won 69 and the Greens 67.

In the system with 299 constituencies, the voter will vote twice. First on a candidate and then on a party. Because many voters vote on a party that is not their chosen candidate, seats will be allocated among other parties to additional seats.

That is because otherwise, in a proportional distribution of seats, there would be a shortage of voting on candidates.