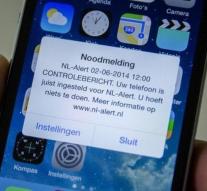 - The 4G network of users on their mobile phone on Monday at 12.00 again an opportunity to receive the control message of NL-Alert. At the previous trial on June 1, many people complained via Twitter that the test warning came late or not.

Meanwhile, the 2G, 3G and 4G networks of KPN, T-Mobile and Vodafone for receiving the test messages. Provider Tele2 early next year received via the 4G network in order.Upon receiving the test in June 35 percent of Dutch people over 12 years old message. To show the percentage of recipients will rise a public campaign twice a year made to make people aware of the warning service. If an alert is broadcast, giving 86 percent of the aforementioned group of recipients that they also pass the message to others in their environment.The government sends twice a year a control message. The settings of the warning message can be tested this way. If there really is something going on, like an impending flood or a fire, releasing toxic substances, an alert is sent to people in the immediate vicinity.More and more people receive a NL-Alert automatically. Some older devices require setting done manually. In addition, not all smartphones come standard on the market with the right reception settings. This is for instance the matter with iPhones. The Ministry of Security and Justice, in which NL-Alert is covered, is in talks with Apple to make the institution NL-Alert standard.
NEW