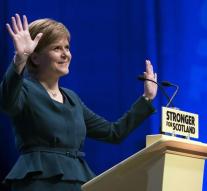 glasgow - Scottish First Minister Sturgeon is next week in a private member that allows a referendum on independence from Britain.

The first referendum resulted in a 'no' in September 2014. 55.3 per cent of Scottish voters rejected independence, 44.7 percent voted for it.

Thereafter, however, the British chose from the European Union. Most Scots are against those Brexit.