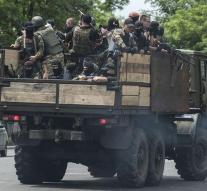 kiev - Heavy fighting between government troops and pro-Russian separatists in eastern Ukraine came in the second week. The army in Kiev reported Monday artillery fire in the Donbass region. Six soldiers were wounded.

The rebels would also have used heavy artillery in the port city of Mariupol. The separatists in the city of Donetsk reported on their side killed two fighters.

The Ukrainian military and pro-Russian separatists are embroiled in fierce fighting, the heaviest in months. In and around Donetsk, the last week in several dozen deaths, both government soldiers and insurgents.