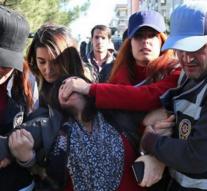 ankara - Turkey on Saturday nine politicians of the Turkish-Kurdish party HDP arrested. That says a spokesman of the party Saturday. It is among others to the presidents of the provincial department and the district department of the party in the southeastern province of Adana.

Friday twelve MPs from the HDP were arrested who are suspected to have links with the militant PKK. They would include guilty of 'terrorist propaganda. '

The EU and several European governments, including the Dutch, have expressed major concerns about picking up the politicians.