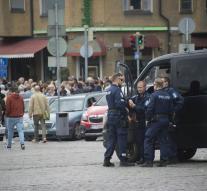 helsinki - The Finnish police have made two new arrests in connection with the bloody strike last week in Turku. As a result, two people were killed and eight people injured.

The police previously held the main verdict, a Moroccan asylum seeker. Three other Moroccan men also confirmed their possible involvement in the incident.

The chief suspect is in the hospital because he is injured. After the attack on passers-by, he was shot by a police officer in a leg. He made a confession, but he said nothing about a motive.