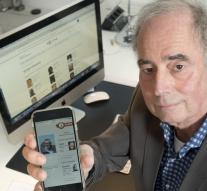 apeldoorn - An app that lets travelers can raise the alarm if they are in an emergency situation, anywhere in the world. Private detective Dick Steffens is currently developing the ' Travellers app' : All important information will be shared with a control center of a security company and with at home, so as to promptly intervene when someone is in need.

Dick Steffens was the former policeman who drove millions from the ransom in the Heineken kidnapping and was for many years active in the Amsterdam police as one of the first undercover pseudo buyers. As a private investigator, and his company Interludium in Apeldoorn, he has spent years working on missing Dutch abroad. Kris and LisanneDe death of Kris (21) and Lisanne (22), who died April disappeared last year during a walk in the jungle of Boquete in Panama, was the reason for the founding of the Dutch Foundation Investigation Missing Persons Abroad for Relatives, abbreviated Simpar. Former detectives, including Dick Steffens, analysts and forensic investigators from the police and gendarmerie offer themselves, a non-profit, since preliminary studies abroad for missing countrymen. Only months after their disappearance were personal belongings and human remains from Lisanne and Kris found. That same disappearance case Steffens brought the idea to develop an app, which lets travelers back home permanently to notify them of their adventurous journey. "If someone goes missing abroad, have you considered laggards really a problem, because it takes days before authorities take action. Authorities do not prolonged, since adults can voluntarily 'disappear', and the Netherlands has been doing nothing without rogatory. "MeldkamersEn thereby fade in those early days of important trace, says Steffens. "Virtually everywhere at a loss a 'wait period' of at least 48 hours to a week sometimes observed. "Those marks are all available now in the" Travelers app, "a program that can be put on a smartphone. That app is now ready for use. There are two monitoring stations where these apps 24 hours a day in contact with it. The app can be tracked all the travel data, such as medical records, insurance, contacts, flights whereabouts, use of transport, the routes to be taken, name and address of tour operator, guide, hotel or hostel. The data is constantly shared with the central stations and contacts. "Once the battery of the phone is critically low, or if the network is likely to fall off, alarm is beaten and the last known location of the phone is registered. Then you later always a starting location to search for someone. There will also be an emergency button function, allowing direct the phone uitgepeild. Pressing the emergency button is a conscious act, so that everyone understands that there really is something going on. If there is no longer any doubt that there is an emergency situation, can authorities, social workers, family and friends directly act, not a loss of 48 hours to a week 'wait and see'. "Steffens has this week had a meeting with the first major travel insurer in the Netherlands, in the hope that the app scale is taken into use. A security company has already promised to provide resources to their control rooms. Also from the person security industry has shown interest, mainly because of the 'panic button' function in combination with the uitpeilen the location of phones. "This is to save lives, I am really convinced. "
NEW