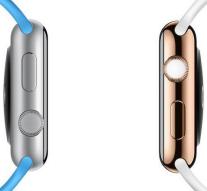 - Apple comes in the second half of this year with a new Apple Watch and an upgraded version of the original watch. That report MacRumors and AppleInsider on the basis of a report to investors of the generally well-established KGI Securities analyst Ming-Chi Kuo.

The upgraded version will have to be able, inter alia, better against water and have a TSMC-processor. The Apple Watch 2 has the same design as the original version and will include also offer a faster processor TSMC and improved water resistance. The new Apple Watch will also GPS, a barometer and a better battery.

It is also expected that it will take until 2018 before the design will change radically. By that time, there will also be improved health applications.