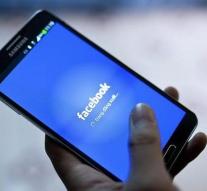 the hague - The government has in the first six months of this year 450 times users' data obtained from Facebook. This is evident from the report Government Requests which published Facebook Thursday. In the second half of 2015 asked the government more than 150 times data on Facebook. That number is almost tripled in six months time.

In almost 90 percent of cases, Facebook gave the information requested. In the remaining 10 percent Facebook provided the data not because data were not available or because there was no legal basis to furnish information.

The applications related to some 750 accounts. Netherlands had 28 emergency requests. This occurs in situations where they have to act quickly, for example in missing goods or lives are at stake.