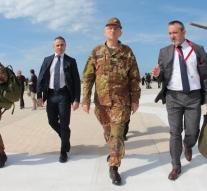 - The largest NATO exercise in thirteen years, started Monday in Italy , Portugal and Spain . At the military maneuvers take 36 000 soldiers belong to 30 countries , 70 ships and 200 aircraft , reports the Ministry of Defence .

Getting exercise Trident Juncture do many Dutch naval ships. Also Dutch marines will land on a Spanish beach and the Air Force has a large transport and tanker aircraft and helicopters ready to move troops and equipment.

The frigate The Seven Provinces has a special role. With the highly advanced radar ship follows a ballistic missile in space. The frigate defends against other ships include "enemy" planes.

The exercise is designed to give confidence NATO allies and deter opponents. The Dutch navy as also is preparing to participate in NATO's rapid reaction force, which is used worldwide.

The Netherlands is in 2016 along with ships and Marines. Russia earlier this year held military exercises with tens of thousands of troops. Moscow also held exercises in the Mediterranean.