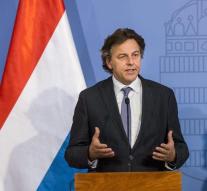 - Netherlands draws a million for mine clearance in the Iraqi city of Mosul. The city is now in the hands of Islamic State, but is surrounded by Iraqi and Kurdish forces. They expect fierce resistance from IS, and after a possible withdrawal of the extremists on countless booby traps and mines.

Many residents of Mosul, the northern Iraqi city and fled the siege now started taking their number is expected to keep growing. Netherlands wants to prevent citizens when they return home after the recapture of Mosul are victims of the explosives left behind by IS.