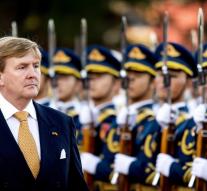 - Netherlands and China will together make more films. The relevant ministers of both countries on Monday signed a co-production treaty. That happened during the state visit of the Dutch royal couple in China. For the Netherlands signed minister Bert Koenders (Foreign Affairs).

The treaty should promote co-productions between the two countries by controlling, among other cultural and economic exchange. Films that have come under the agreements will be recognized as national films and are thus eligible for financial assistance in both countries.

The agreement provides Dutch films wider access to the Chinese audience, because they are exempt from China's quota on foreign films. Our country already has co-production treaties with France, Canada and Germany and soon to include South Africa.

Many parties, both in the Netherlands and China, have been working on the preparation of the treaty. Doreen Boonekamp, ​​director of Dutch Film Fund : " The treaty opens up new opportunities for cooperation and cultural exchange between the Dutch and Chinese film industry. Especially in the field of documentary, animation and children's films, areas in which the Netherlands stands out, our Chinese partners have expressed their interest. "