Home / Tech / Netflix: 'We know what you watched, when, how long' 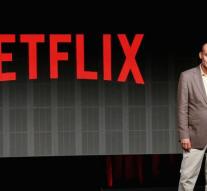 amsterdam - Do not be afraid, even though we know almost everything about you. That is the message of Todd Yellin, Vice President of Netflix Streaming. 'We know what you looked at, what time, what device, how long you watched when you were swaying, what you watched and what after, what you watched yesterday and what a year ago and how fast your internet connection is.' Yellin Brought a lightning visit to Amsterdam, where Netflix's headquarters are for Europe, the Middle East and Africa.

Netflix has almost 100 million users worldwide. Everyone makes the company a profile. The offer will be adjusted accordingly. For example, who loves British costume dramas, similar films and series are first held. About 80 percent of what people look at is based on those suggestions. Yellin: 'What's in my place in the first, second and third places of the menu is maybe 49, 51, and 63th. ''

Thanks to all of these user data, Netflix knows that people are viewing forty to fifty titles before they cut the button. Yellin: '' They can also watch the regular TV, or facebook on their phone. That is the moment of truth, and we want to win that moment. ''

What Netflix also knows: In the morning many people are watching their phones. On the way to their work, for example, they see the end of an episode where they did not turn on the previous evening. Around lunchtime, many people just watch a laptop. That means they are probably at work, with the sign on lap.

Netflix has learning algorithms, deep learning, to process all that data. Yellin: '' There's a lot of math to look at to determine what could fit you. ''

Some data are measurable: what do you see, how often? Do you prefer romantic comedies or horror? Netflix maps each movie and each series in detail. 'We measure how heavy it is, how much violence there is, what kind of animals are there, how much sex there is, what kind of sex, whether there are agents, whether that's good or just corrupt agents, what actors Into play. ''

But other things are less clear. That must be learned by Netflix. 'What you watched yesterday is more relevant than what you saw years ago. But should we weigh twice more or five times? And what if you stop after a few minutes? Is that negative because you do not look any further and apparently do not appeal? Or is it positive because there was something in your mind that made you decide to go? '

Afraid of an information bubble, where people only get what they want and want, Yellin is not. 'This happens when you amateuristically deal with data. You must explore, do not abuse data. Imagine, you sign up for us and you start on the first day with a horror movie. Should we then only offer horror movies? You may also like comedy or documentaries, or movies from your own country or from Asian movies. Would you just like to see the same all the time? ''