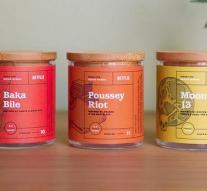 - Streaminggigant Netflix is ​​launching a collection of self-developed wiets. The Netflix Collection is based on some popular Netflix series, such as Orange is the New Black, Arrested Development and Bojack Horseman.

'Each species has been developed with the specific show in mind,' said Netflix. 'Such a crazy show is more indica, while dramas are just more sativa to make the strong scenes more powerful.

With Orange is the New Black in mind, 'Poussey Riot' has been developed. It's meant to chill with someone, talk and make stupid jokes. 'Banana Stand Kush' is inspired by Arrested Development and is ideal for joining a big yellow joint. According to Netflix.

The set of varieties will be sold this weekend during a special medical event event at Alternative Herbal Health Services in West Hollywood, California.

It is prohibited by law to send weed by mail so it is not online for sale. Also, Netflix will not earn anything from the sale of the weed.