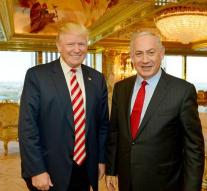 jerusalem - Israeli Prime Minister Benjamin Netanyahu has Donald Trump called ' true friend of Israel. ' Netanyahu said he looks forward to working with the winner of the US presidential election.

' I am confident that the Trump and I elected president will reinforce the unique alliance between our two countries and will lead to even greater heights, '' said the Israeli government in a statement.