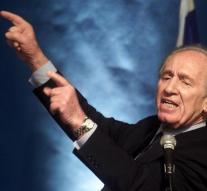 - Israeli Prime Minister Benjamin Netanyahu and his wife Sara have responded to the death of former Israeli President and Prime Minister, Shimon Peres. They are deeply sad: ' Peres was loved by all the people, \'said Netanyahu Wednesday.

President Barack Obama of the United States, the former Israeli President Shimon Peres hailed as a warrior ' to Israel and the Middle East. \'After the death of Peres Obama said that America is in debt to Peres. ' No one has efforts to engage in peace between our countries than Peres. A light has gone out, but the hope he has given us will burn forever, \'Obama said.

Peres died Wednesday in Tel Aviv at the age of 93, after he suffered a massive stroke on 13 September. Peres was twelve Israeli cabinet minister, twice prime minister from 2007 to 2014 president. In 1994, Peres got together with Palestinian leader Yasser Arafat the Nobel Peace Prize.