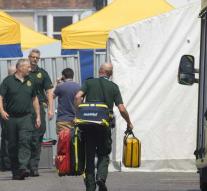 the hague - The nerve poison that recently killed a woman in the English city of Amesbury is chemically identical to the novitsjok that was used for the assassination attempt on the former Russian double spy Sergei Skripal and his daughter Julia. This is evident from the research that the Organization for the Prohibition of Chemical Weapons (OPCW) in The Hague has done at the request of the British authorities. The report was presented Tuesday.

Father and daughter Skripal were found unconscious on a bench in Salisbury in March. They eventually survived the attack with the deadly substance, developed in the former Soviet Union. The case led to a serious diplomatic crisis.

At the beginning of July, a British couple in neighboring Amesbury accidentally came into contact with novitsjok. The man thought he had a bottle of liquid that he kept for a perfume bottle. His girlfriend, mother of three children, opened it and died a painful death.