Home / World / Nerves are on edge in France 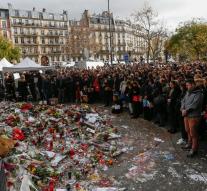 - The situation in France remains extremely tense after the bloody events of Friday night. The response to security alarms is many times sharper than usual, for example, found Monday morning in the northern city of Cambrai.

There was evacuated a high school mid-morning after a bomb threat. All 3000 pupils had to leave the premises and seek shelter in a nearby event hall. The police came en masse to the school, reports La Voix du Nord.

Many students walk to cry, according to the newspaper. " There is no panic, but the tension is palpable ", said an eyewitness.