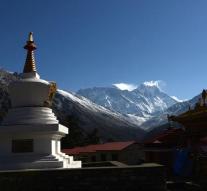 kathmandu - The Nepalese government wants to measure the height of the world's highest mountain, the Mount Everest. Is the mountain still 8,848 meters high?

In recent years there are rumors about the smaller ones of the mountain. It would shrink by the melting ice caps and through the earthquake of 2015. The mountain could also grow by shifting the continental plates. Reason for authorities to re-measure the mountain in a major expedition, CNN said.

The expedition would cost around 1.3 million euros.