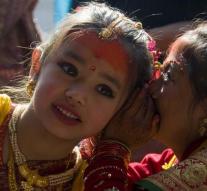 kathmandu - The government of Nepal is doing too little to end child marriage. In Nepal, 37 percent of married girls before they are eighteen and 10 percent even before their fifteenth, although the legal age of marriage for both men and women is twenty. Boy about 11 percent marry before they are eighteen, says human rights organization Human Rights Watch.

Many boys and girls in Nepal,, robbed by the child marriage of their future ', says HRW researcher Heather Barr.,, The government promised reforms, but nothing has changed in small towns and villages in the country. '' Poverty, political instability and lack even the problem seems to have increased to housing caused by the earthquake last year.

Girls who marry young and have children, often not in education longer and can get by pregnancy with life-threatening health problems. Domestic violence is often at their part.