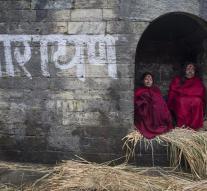 kathmandu - Nepal is renouncing an ancient Hindu practice in which women are worn out of their homes during menstruation. Parliament has adopted a law imposing a penalty of a fine of 25 euros, as was announced on Thursday.

According to Hindu use, women may not get home for four days because they are 'unclean'. The women are banned from the cowshed or other places outside the home. Nor should they touch other people or cattle and they must abandon with their hands of fruit and vegetables. At the earliest on the fifth day, they are again tolerated at home.

According to women's rights organizations, at least ten banned women have died in the past ten years by snake bites, undercooling or severe bleeding. Since 2005 there is already a ban in force but in the western part of the country the use was still stubborn.