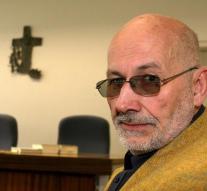 berlin - The infamous German neonazi Horst Mahler has applied for asylum in Hungary. According to German media, the now 81-year-old extremist has even used to the Hungarian premier. The elderly Mahler hopes to escape his cell punishment in Germany.

The Mitteldeutsche Zeitung published a leaked letter from Mahler on Monday asking Prime Minister Victor Orbán to give asylum to someone who is being prosecuted politically. 'The elderly neonazi was co-founder of the left-extremist Rote Armee Fraktion (RAF). Later he left the terrorist group and joined extremist groups in the right.

Mahler set a ten-year imprisonment for anti-Semitic pronouncements and denial of World War II. A judge decided two years ago to temporarily leave the prison because of illness. At the end of last year, Mahler appeared to be recovered and had to sit out for the rest of his sentence, but the German refused.