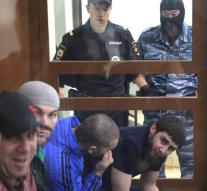 moscow - The trial of the suspects in the murder of Russian opposition politician Boris Nemtsov on Monday launched in Moscow. The five Chechen suspects all deny having anything to do with the murder. The former deputy prime minister was shot dead in the street last year, just steps away from the Kremlin.

Nemtsovs family fears that the principals of the murder will never be found. A family lawyer told the court that the investigation into the murder had been neither objective nor comprehensive. He pointed These include the lack of video evidence, though the murder was committed near the well-guarded Red Square and the Kremlin.

The security at the beginning of the process, was substantial. The suspects were brought to the courtroom by armed and masked officers, the BBC reports.