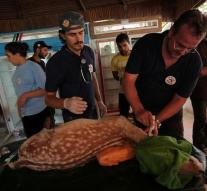 - Animal rights activists have rescued the last fifteen animals from a heavily neglected zoo in Gaza. They were removed from the enclave through the Erez border crossing with Israel, confirmed an employee of the organization 'Four Paws' Wednesday.

In the face of heavy Israeli air strikes on the Gaza Strip after a rocket attack on an Israeli border town, the operation,, was an incredible challenge, '' said Indra Kley.

A tiger will now in South Africa a new house, five monkeys in Israel and the remaining animals (hedgehogs, turtles, hawks, a pelican, an emu and a deer) go to Jordan.


'Four paws' described the zoo in Khan Younis as,, the worst zoo in the world. ' Dozens of animals have died miserably because they did not get enough food. The zoo is now permanently closed, said Kley.

The ongoing conflict between the ruling Hamas and Israel worsened living conditions over the past decade in the blocked Palestinian territories in the Gaza Strip.