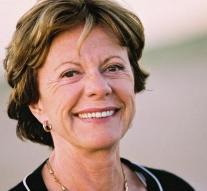 - Because of a stalker, Neelie Kroes has left her house in Wassenaar for a secure apartment in Amsterdam. That's what the former euro-commissioner says in a women's specialist of HP / De Tijd on Friday.

In the interview with HP / De Tijd, she says: 'I have moved from a big house in Wassenaar to an apartment in Amsterdam in recent days. I had a beautiful house with a large garden, but it was also very lonely. '

Kroes continues: 'After I was stalked last summer, my son, who lives in America, said,' If you do not take action now and look for an apartment, I'll lock you up. 'And then I found an apartment with a closed driveway and a doorman near the Museum Square. '

For a long time, Kroes spent little attention on the stalker. 'First, I did not beat as much as eight on that stalker. Of course it's annoying if some fool arrives at your impossible times, and it was also very intrusive, but it is more common if you are a public figure. Such a man does nothing, I said. '

Her son stressed that she had to call action. 'That said Els Borst too,' said my son. 'I found that a good argument. You just have to find the wrong one. '