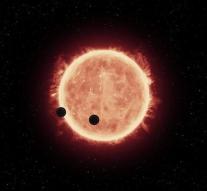 - By a solar storm has erupted almost 1967 war between the United States and the Soviet Union. American radar systems got stuck and the United States accused the Russians of sabotage. Bombers were ready to take off, but a few scientists managed to convince the army that it was a natural phenomenon. Therefore, the peace was preserved.

The scientists then worked for the US military. They tell their story in the science journal Space Weather. Their work, the sun was still virtually unexplored territory.

They saw on May 18, 1967 that very many spots appeared on the surface of the sun. Such spots are areas where the magnetic field is stronger than usual. A few days later swung the sun thereby charged particles into space. US radars in the Arctic region, which had to warn of incoming Soviet missiles, it did not work anymore.


An attack on that radar would be an act of war. And the United States were already on edge because of the Cold War. Constant flew combat aircraft with nuclear weapons around. Because of the failure additional units were readied for departure.

The aircraft eventually remained on the ground after the solar researchers had explained their commanders what happened. Not the Soviet Union, but the sun was blocking the radar. When the solar storm subsided after about a week, the equipment worked again.

Charged particles from the sun care on earth for the northern and southern lights. Which is usually seen only in the Arctic. But the storm of 1967 was so powerful that the light came near Mexico.