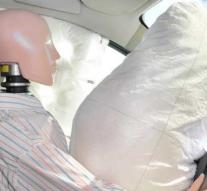 melbourne - Nearly three million cars with life-threatening airbags in Australia are being recalled. It is the largest recall action ever on the continent.

It concerns airbags from manufacturer Takata. Up to now, 20 fatalities worldwide have been reported by the defective air cushions, of which one in Australia. The airbag can explode during extreme heat, allowing shards to drill into the eye, chest, face or neck of motorists. That is what Australian media report.

Earlier this year, thousands of cars with similar airbags were recalled in the Netherlands.