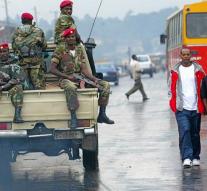 - Security forces in Ethiopia have over the weekend in the Oromiya and Amhara certainly killed 67 demonstrators. That Amnesty International reported Monday. Earlier, the Ethiopian opposition politicians all mention of dozens of deaths by the violence of soldiers and police officers.

In several towns in the central region of Oromiya and Amhara in the northwest this weekende protesters took to the streets. They shouted slogans against the government and demanded the release of demonstrators who were arrested earlier. Also called on the protesters to political reforms.

Police officers and soldiers acted tough against the demonstrators. The security forces also blocked access roads to cities where it was claimed.,, Police fired live ammunition at peaceful protesters, '' Amnesty International reported. According to the human rights organization there alone, slain in the northern city of Bahir Dar thirty people in one day. It would also wounded hundreds and hundreds of people have been arrested.


Last year there were already killed dozens by unrest in Oromiya. Residents were in rebellion against the expansion of the nearby capital Addis Ababa and the resulting threat of expropriations in Oromiya. Earlier this year, the authorities deleted the proposed expropriation. However, peace has not returned, because the government holds a number of activists from Oromiya some time.