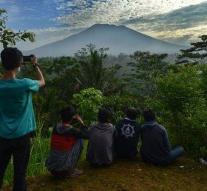 jakarta - For fear of a volcanic eruption, the Agung has already killed nearly 50,000 people on the Indonesian island of Bali. According to a spokesman for the National Disaster Office, a total of 49,300 people have left their homes.

'They spend the nights in emergency shelters. However, there are also residents who want to stay despite all warnings. It also means that retired residents return to the dangerous area around the volcano, 'said Sutopo Nugroho.

With 3030 meters, the Agung is the highest mountain on the vacation island. The volcano broke out last in 1963. That eruption lasted more than a year. More than 1100 people died.

Indonesia is on the so-called Ring of Fire. In that area, various plates of the earth's crust come together. In the island state of Indonesia there are about 130 active volcanoes.