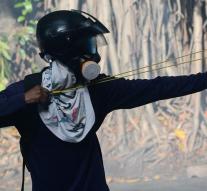 caracas - Since the outbreak of early protests against the government in Venezuela in early April, 2815 participants have been arrested. According to human rights activists, 1240 of them are still held.

Of the arrests, 341 were headed for a military court. For 178 of them, it resulted in a jail sentence.

In the collisions between security forces and demonstrators, 55 people came together. There were more than a thousand injured.

In Venezuela, massive masses are demonstrated daily against the government of Nicolas Maduro.